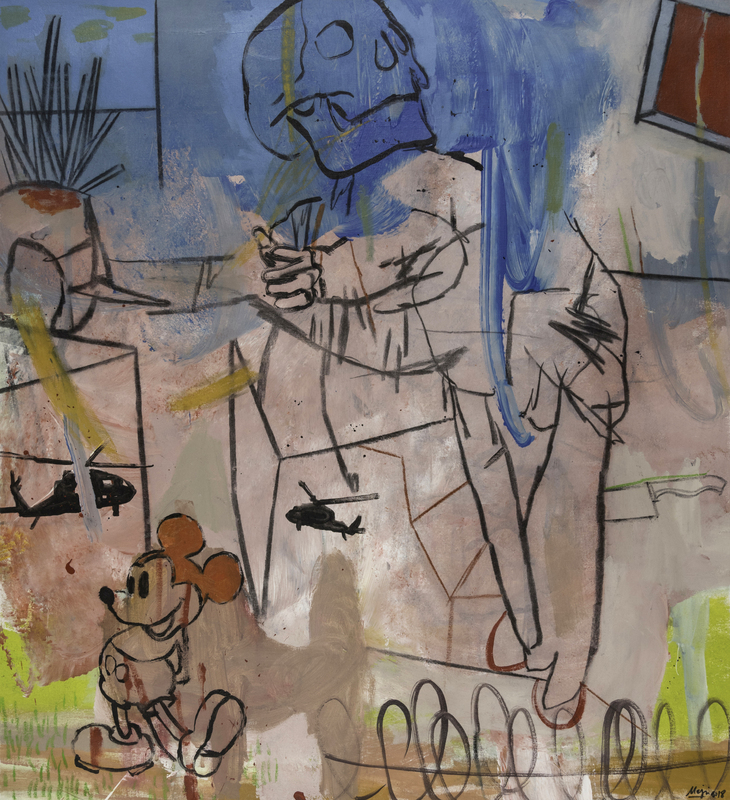 This work was created in response to poetic texts written by Habibah Sheikh, a nomadic performance artist originally from Lebanon, and the curator of the exhibition, Mitli Mitlak (Like You, Like Me). In the text, a character named Ruba experiences the destruction of war firsthand and becomes a refugee in the process. This work uses the imagery of violence to evoke the emotional and physical vulnerability of certain Mediterranean themes...such as being without asylum.

Carried the sick on our backs
Children in arms
We walked and walked
In hunger and thirst
In death and pain
from country to country
When at the border
Disappointed, deceived, let down
The military would not let us in
we were left to struggle
On this mountain
Ignored by the world


In this series of paintings, Mejri has the infant's quality in an uninhibited flow. Childlike drawings are of the outside ruling body, beaming an image onto the territory, becoming the body of the people, through apparatuses of state control. The politicized body relentlessly wants to free itself but is caught in a conflict with itself, that ultimately divides it. It is clear that here, violence is not violence, in itself. It comes out as violence...from a very soft space that has been wounded. As in certain rituals, the human spirit seeks to detach itself from all that society has covered it with...and to feel where the origin of the sickness is. Spirits are levitating out from turmoils...pains of a trivialization, where the politicized body is in postures of death like portraits of the living. The voice of liberation, a foreign one (cartoon).

Painting Was Made In The Artist's Resident Country Of Tunisia